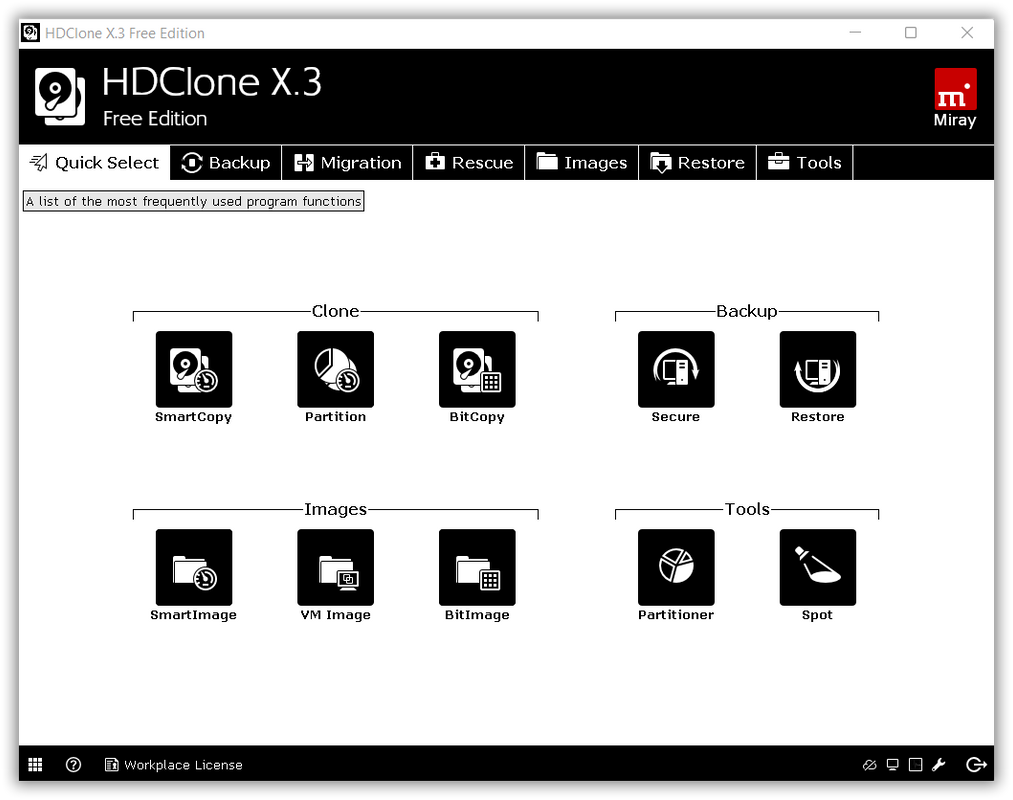 The features of HDClone Professional


NEW: Different
images Save images as changes to the original image

This feature allows you to save the made changes to the original backup, creating different backup images with a file size that is usually significantly lower. Similar to the incremental backups of other applications, hdclone's differentiated backups have the advantage of being independent of each other, allowing you to delete them selectively. Consider this template scenario: You can create different backups daily and delete six of the seven backups per week, keeping one backup for each week. In addition, there is no difference in performance when restoring different backups

HDClone can access RAID Intel software (also known as Intel Matrix Storage) in modes 0, 1, 10 and 5 in the self-start version (HDClone/S). The RAID of Intel Software can be used in the same way as conventional hardware RAID systems.

SSD accelerates with TRIM
Read and write faster through TRIM

TRIM commands are used by HDClone to tell the SSD which disk area is no longer needed. In addition to higher copy speeds, SSDs also achieve initial performance afterwards, resulting in higher reading and write speeds.

For more than 30 years, the 512 bytes have been standard area sizes one and only for any large PC storage medium. Now, modern drives in the "Advanced Format" can come in different regional sizes (512, 512e, 1Kn and 4Kn). HDClone allows you to create copies and file images between disks with different regional formats and automatically convert NTFS and FAT file systems.

Allows to select one or more partitions of the disk for transfer without having to copy all partitions. This saves space on the target drive, making it possible for you to use a smaller target or use extra space for the remaining partitions. The special thing about PartitionSelect is that it transmits the necessary data in a single step, regardless of the size of the partitions or how they are arranged. The copying of partitions, plus other adjustments will be made with almost no additional time required, and HDClone will still operate at full speed.

HDClone can be booted from CD/DVD, floppy disk and USB stick, even on the SecureBoot system, so you can even restore images without the operating system being active. With the same interface on both programs, you can easily switch between the self-start version and the Windows program, while supporting the mouse and USB and Bluetooth keyboard.

Instead of copying directly from media to media, you can also store the exact image of the media in a file image. Optionally, images can be created in compressed or encrypted form. With QuickCompress activated, this hardly takes extra time to compress. These file images can be stored, stored or transmitted over the network and the Internet. They can be restored 1:1 to a medium that then acts like a live copy that has been created. HDClone can also create dynamic VMDK/VHD images. Such an image can be mounted directly in VMware, VirtualPC and VirtualBox virtual machines.

HDClone includes Miray Virtual Disk software. You can use this software to attach file photos that have been created using HDClone (including VHDX / VDI) as Windows virtual drives. This allows you to directly access files and folders in the image without having to restore the image to the previous physical disk. Images can be accessed in read-only or writeable mode, and changes made to the image can be implemented with HDClone's image recovery feature.


This feature allows HDClone to run on a computer with a new BIOS UEFI. Gpt partitions used for large hard disks (> 2 TB) are automatically identified and reproduced correctly.

HDClone makes logical area (SmartCopy) copies of the FAT, NTFS, HFS+ and ext2/ext3/ext4 file systems in just a fraction of the time it usually takes – delivering comparable results. For example, SmartCopy can copy the entire windows XP basic settings in less than 20 seconds.

Increase the size in flight (NEW: HFS+)
Adjust the file system to a larger target quickly

HDClone can increase the size of your FAT, NTFS, HFS+ and ext2/ext3/ext4 partitions automatically during copying.

Reduce size on the go (NEW: HFS+)
Adjust the file system to smaller targets on the go

HDClone can automatically reduce the size of your NTFS, FAT, and HFS+ partitions while copying. This allows you to adjust the partition size during copying or moving to smaller media. Perfect for migrating to an SSD (usually smaller).

HDClone can perform perfect anti-fragmentation on NTFS, FAT and HFS+ drives while copying or recovering from file images. This anti-fragmentation requires only a fraction of the usual time, which takes almost no extra time compared to the copying process.

HDClone can now create copies and file images of drives and partitions during Windows operation – even for system drives.

When copying from a vehicle with faulty areas, these areas will be ignored on the first run. Rescue operations will be performed at the end of the process to avoid further damage to the drive.